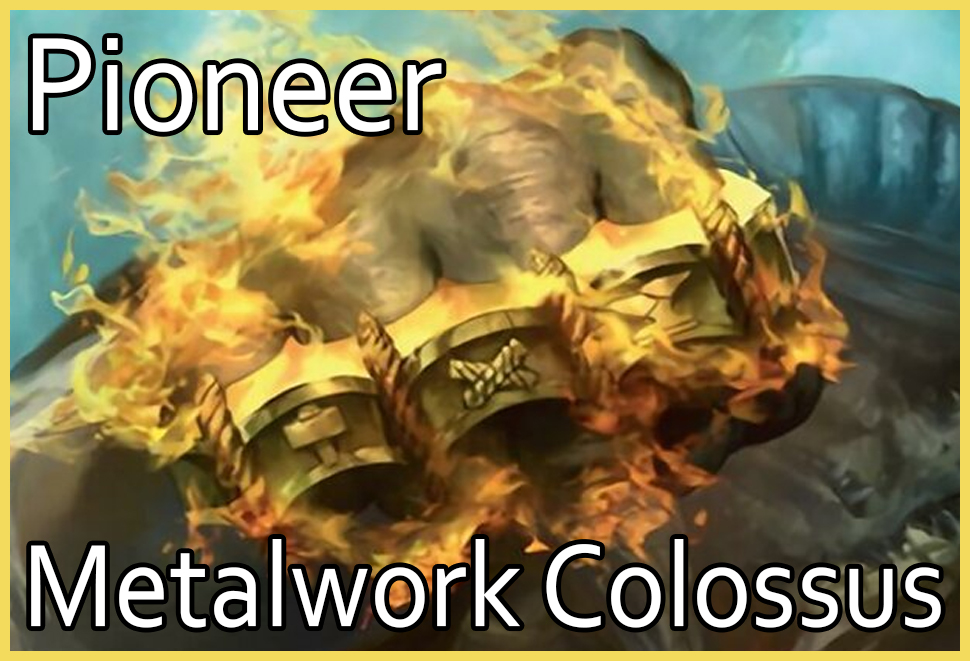 We’ve seen various Metalwork Colossus decks in the past, but with Streets of New Capenna and the release of Brass Knuckles, these decks started showing up in the 5-0 deck dumps and made a splash with a 23rd place finish in the Pioneer Challenge thanks to Karatedom. In fact, Karatedom went 4-0 into 4-3, missing out on putting this deck into top 8 by one to two matches. I played this deck on stream and it plays incredibly smoothly if you can find your Metalwork Colossus and I think this could be a great fun deck for your local events, FNMs, or Magic Online Leagues.

So, let’s dive right in to see what makes this deck tick and figure out if this Colossus is set to become a fixture of the Pioneer metagame or if it is just a metal flash in the pan.

other
pioneer
buy from TCGplayer $160.99

The namesake of the deck, Metalwork Colossus is a large creature that comes down for as little as zero mana and can recursively come back from the graveyard. It requires some major deckbuilding considerations, but in a deck like this, you can maximize how early you can drop multiple 10/10s, which are very hard to answer in Pioneer. Each non-creature artifact you control reduces the cost of Metalwork Colossus for x mana, where x is the non-creature artifact’s mana value. The cost reduction can get greater than 11, making Colossus free to cast, including multiple copies. 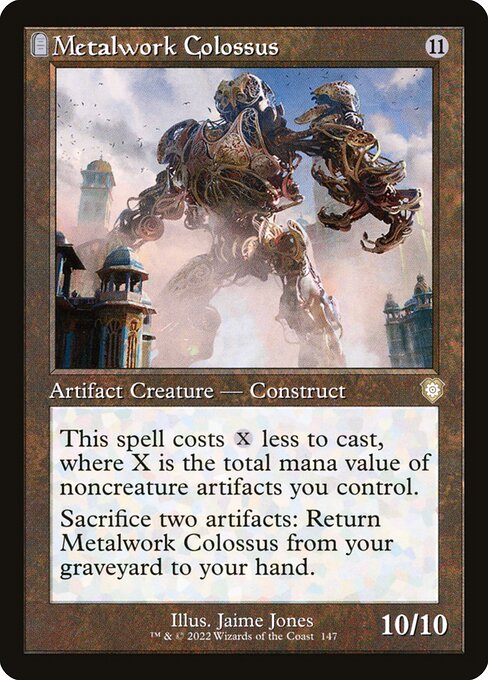 Being able to loop Colossus from the graveyard, much like World Breaker, gives you late game insurance against the decks that can counter or kill your large threats. Various older versions including some 5-0 lists ran Witch's Oven as you can sacrifice the Colossus, get two foods, sacrifice them, and buy back the Colossus to avoid exile effects. Even in this build, you can reasonably sacrifice excess artifacts to ensure you always have a threat so long as you can find one copy.

With only one major threat, the deck relies on several ways to search for Metalwork Colossus to ensure that once you’ve established your army of cheap artifacts, you have a worthwhile payoff. In terms of cards that help you filter towards Metalwork Colossus without directly tutoring it, you have Glint-Nest Crane and Ingenious Smith. Smith acts as a pseudo back-up threat that can out pace opposing creatures if given enough time, but in most games, it serves to help you find lands, enabler artifacts, or Metalwork Colossus. Glint-Nest Crane works the same, but instead of being an additional threat, it serves as an additional roadblock to slow down opposing decks so you can survive long enough to land a 10/10.

In terms of pure tutors, this deck has Inventors' Fair and Sanctum of Ugin in the mana base to ensure that you can find additional copies of your threat. Both require some legwork to function; Fair requires you to have three artifacts and five total mana to use, whereas Sanctum works once you already have one Colossus on the stack. Often, you can get to eleven or more mana value in artifacts, play a Colossus, sacrifice all your Sanctums, and add 20 to 30 additional power to the battlefield for free. Every card in the main deck outside of the ones mentioned above are non-creature artifacts that help to enable early and free Metalwork Colossus. Focusing in on the key aspects of each one, we have the one-mana spells: Portable Hole and Moonsnare Prototype. Portable Hole serves as a main deck answer to early creatures and can help you stabilize until you outsize the opponent. Moonsnare Prototype does its best Springleaf Drum impression, but by being able to tap other artifacts or creatures, it ensures you can ramp early through your cheap other artifacts.

Moving onto the two mana artifacts, we have Wedding Invitation, Prophetic Prism, and Gilded Pinions. Wedding Invitation and Prophetic Prism give you a draw when they enter the battlefield. Invitation can sneak through Metalwork Colossus on clogged board states and ensure that you have a means to end the game. Prism helps to fix your mana, especially post board when many of your answers to early aggression require white mana or your counterspells require blue mana.

Gilded Pinions works to also give your creatures evasion, but its main purpose is to help ramp and smooth your draws with the treasure that comes when this spell enters the battlefield. Since treasures have a mana value of zero, you are incentivized to use it to power out more artifacts or colored spells to enable earlier Colossus starts.

Finally, we have the two higher cost artifacts in Haunted Cloak and Brass Knuckles. Both give Colossus powerful keywords such as trample, haste, vigilance, or double strike along with making it much easier to play cheap Colossi. Brass Knuckles contributes eight mana worth of discount to your Metalwork Colossus, meaning you are almost always able to play Brass Knuckles and then immediately slam as many Colossi as you have in had that same turn.

This matchup is a big part of why this deck is feasible. Most of the removal in Rakdos Midrange is mana value capped or damage based, and neither can stop an early Colossus. Even if they can answer your Colossus, they struggle to grind through several, including rebuying the same Colossus over again. While you need to ensure your life total doesn’t take too much of an early beating, if you can find your Colossus, it becomes very difficult for them to take control of the game.

You want to board in Karn, Scion of Urza as an additional card advantage engine and threat maker to spread their post board removal thin to ensure you can elongate the game and find your threats.

This matchup is like the old Mono Green Eldrazi ramp deck versus control. You have a large recursive threat and can give it haste to keep pressuring the opponent. Be wary of cards like The Wandering Emperor if you must attack with a non-vigilant Colossus. Normally against control decks when you have few threats, you want to pick your spots, but here you want to run them out of resources as quickly as possible and leverage counterspells on key spells like Farewell. You are the aggressor and an early resolved Colossus or two can run through Azorius.

This matchup is tougher than you might think. Like Rakdos Midrange, the removal lines up poorly for Izzet Phoenix against your Colossus, but their ability to close the game quickly with Thing in the Ice and multiple Arclight Phoenix alongside counterspells can make the game difficult. If a Colossus resolves and you can get some equipment on it, they have very few avenues to stop you from killing them. If you can stop their more explosive starts along with early Things, you can quickly get over the top of them.

This is a tough matchup. Your best draws can easily get a turn 3 Colossus that Mono Red has no chance to answer, but if it gets to turn 4 or 5, often Red can go around your one big attacker or blocker and kill you. You need to interact early and get an early Colossus down and unfortunately; your interaction slows down your ability to put out Colossus. If red comes back in force, this deck can struggle to get out ahead of the opponent’s clock.

Your ability to go over the top of this deck, especially with Haunted Cloak or Gilded Pinions giving you evasion, makes the engines of Rakdos Sacrifice much less effective. You really only need Glass Casket to answer Mayhem Devil and various threats left unprotected by an Oven, but if you can keep Devil off the table, you can run through their game-plan quickly as Rakdos Sacrifice has virtually no answers to a Colossus.

That’s it! Be sure to take this deck out for a spin at your local FNM or perhaps at your upcoming RCQ as it is a deceptively powerful deck that gets a lot of advantage from the suite of removal most decks play in Pioneer right now. Be sure to let me know over on Twitter how you like the deck and your best turn 3/4 Colossus pictures!

Thanks so much for reading and be sure to stay safe out there!