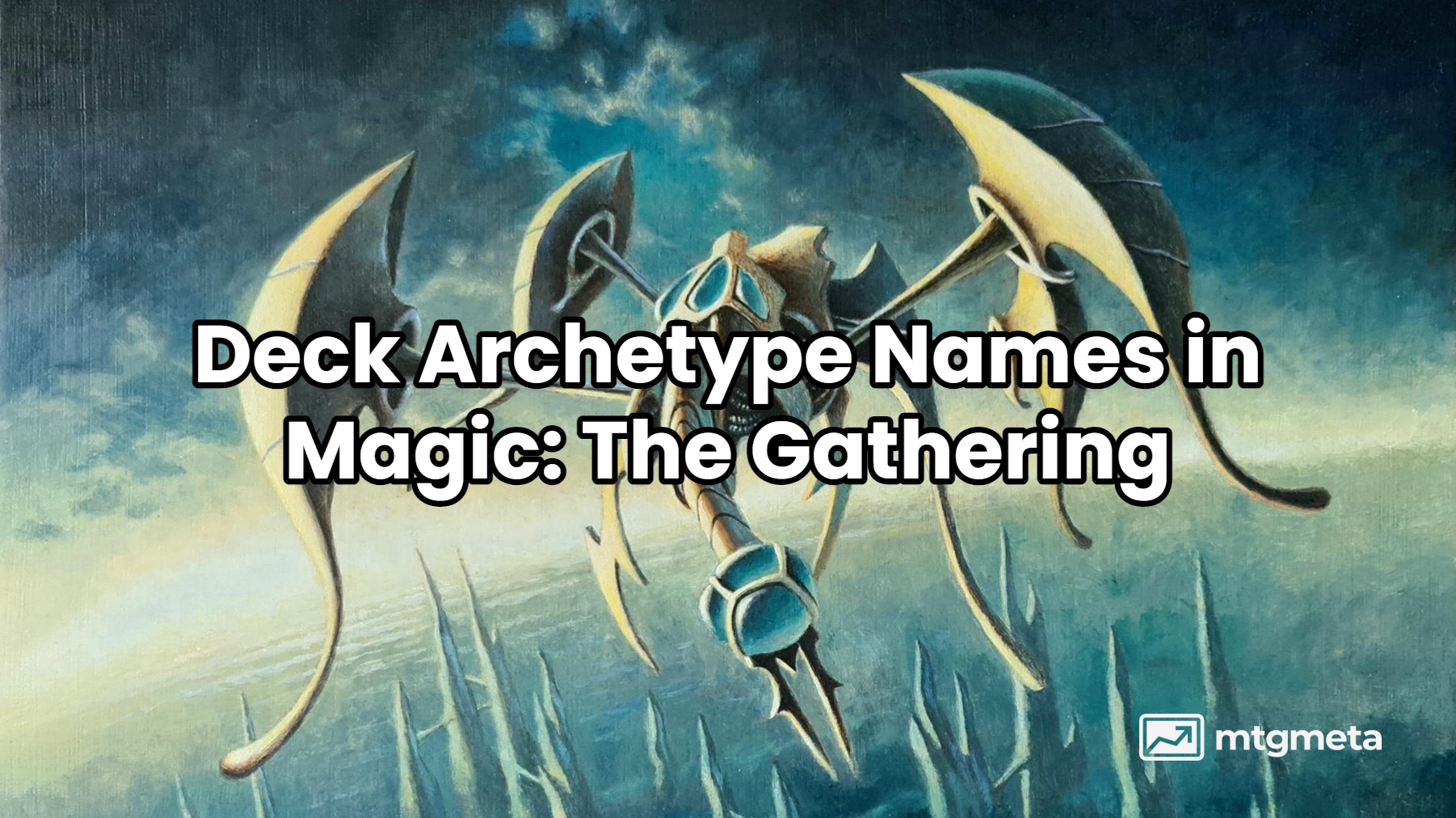 Magic: The Gathering is known as a complex game that can often be difficult for new players to fully learn. This reputation has been earned not only because of the gameplay itself, but also because of the terms and jargon that are in common use by the community. In an attempt to help players overcome this hurdle, we have created guides that lay out as many of these terms as possible.

This guide is focused on how Magic players typically name or describe decks. Players sometimes come up with their own special names for their deck, but more often, especially in more competitive circles, decks will simply be identified based on what archetype they fall into and the colors that are in the deck. We also have a separate guide that details all of the names for the color combinations in Magic and where those names come from. If you’re a new player, you may want to check out that guide first and/or keep it open for reference as we continue.

There are hundreds of different archetypes in Magic’s many formats, but there are a handful of blanket terms that can apply to the majority of decks. We’re going to first define those major archetypes, as they are the ones that you will see the most often. Afterwards, you will find an alphabetical glossary of the archetypes you will see listed here on MTG Meta and our other site MTG Arena Zone.

A deck’s colors also have their own naming conventions as well. We’ve created a separate guide that will help you learn these terms as well – check it out at the link below:

The Core Archetypes in Magic: The Gathering

As mentioned in the previous section, there are countless named archetypes in MTG, but most of them can be boiled down into one of four primary categories that are often referred to. These four categories are each nearly as old as the game itself, and it is important to understand the differences between them and the roles that they each fill in the game.

When viewing decklists from other players online, you will often see the deck named by one of these archetypes and a color descriptor (e.g. Azorius Control or Gruul Aggro). Let’s break down and define these four primary categories: Aggressive decks, usually shortened to just “aggro,” are a staple in every format of Magic since its inception. Essentially, the game plan of an Aggro deck is to play creatures, also called threats, and attack the opponent’s life total quickly and efficiently enough to reduce it to zero before they can enact their own strategy.

Aggro decks are perhaps the most straightforward of MTG’s archetypes, although that does not mean that they are easy to play well. Just like any other deck, Aggo decks still require a great deal of skill to master the play patterns and proper sequencing of actions. Typically, Aggro decks are light on spells that allow them to draw or gain access to more cards from their deck, usually referred to as card advantage – this means that it is crucial for the aggro player to use their threats as efficiently as possible. Control decks are thusly named because they aim to slow down and eventually stop the opponent’s gameplan, establishing control over the opponent and therefore the game. In contrast to Aggro decks, which actively deploy threats and demand that the opponent either stop them or “go over the top” by doing something more powerful, Control decks are defensive in nature, and aim to respond and react to those threats as they arise.

Another key aspect of Control decks is that they rely on consistently drawing more cards from their deck to continually allow them to answer the opponent’s threats. Control often relies, at least to some extent, on single-target removal spells that result in a one-for-one exchange with the opponent: one card is used to deal with a one-card threat. This means that control decks need to draw more cards than their opponent to maintain their advantage and ensure that they always have the answer to whatever the opponent is doing. Combo is the third of Magic’s core archetypes, and as with the previous two, the name is fairly self-explanatory. Combo decks are designed to, as quickly and efficiently as possible, assemble a certain combination of cards that either win the game outright or provide enough powerful synergy that they are able to win in short order.

Over the course of Magic’s history, many cards have been printed that are able to interact with one another in ways that allow for infinite or highly-repeatable loops. Sometimes, these loops can win the game immediately once the combo has been assembled, such as combos that involve dealing one damage to the opponent with each cycle.

Other times, the combo may not win on the spot, but rather set up a game state where winning is inevitable, or very difficult to stop unless the opponent has a specific answer. An example of this would be a combo that generates 1/1 creature tokens – unless they have haste, the combo player may have to wait until their first turn following the creation of the tokens to win.

Combo decks are often complicated and rely on strange rules interactions, and can therefore be difficult to construct and play. They are nonetheless a crucial part of the game of Magic, and are an important part of the metagame in virtually all of Magic’s varied formats. Sitting somewhere between Aggro and Control, Midrange decks play a strategy that is defensive and controlling in the early game, but then flips in the mid-game to play large and efficiently-costed threats and take over the game. Midrange generally plays few low-cost creatures, and instead fills their early curve with cheap interaction that can deal with Aggro threats for long enough to out-scale them with impactful creatures and Planeswalkers.

Midrange decks tend to be at their strongest against Aggro decks, as they are designed to effectively answer the Aggro threats early and then easily defeat them with their more powerful midrange threats that often outclass anything that an Aggro deck can do. Conversely, Midrange decks will often suffer in matchups against Control, as they aren’t generally fast enough to kill the Control player before they can get set up, and the efficient removal and counterspells often found in Control decks are very effective against the 5-7 mana threats that Midrange is known for.

Individual cards: Logically, many of the archetypes in Magic are simply named based on a key card that the deck is built around. As a recent example, Emergent Ultimatum was an extremely powerful card during its time in Standard, and so Sultai Ultimatum became the name of a highly played archetype in the format. There are countless other examples of this naming convention, such as Izzet Epiphany (named for Alrund's Epiphany), Jeskai Creativity (Indomitable Creativity) and many, many others.

Mechanics: Decks may also be named after a game mechanic that is a core element of that deck. Temur Adventures was a deck in 2021 Standard that was named after the Adventure mechanic. Decks have been named after Cycling, Mutate, Threshold, and so many others over the course of Magic’s history.

In the following glossary, we have included the names of some of the most popular archetypes in these categories, but as there have been hundreds of archetypes named after specific cards and mechanics, it does not make sense to include them all. However, simply being aware of these basic conventions should help you to make sense of many of the archetypes named in this way that you may come across in the wild.