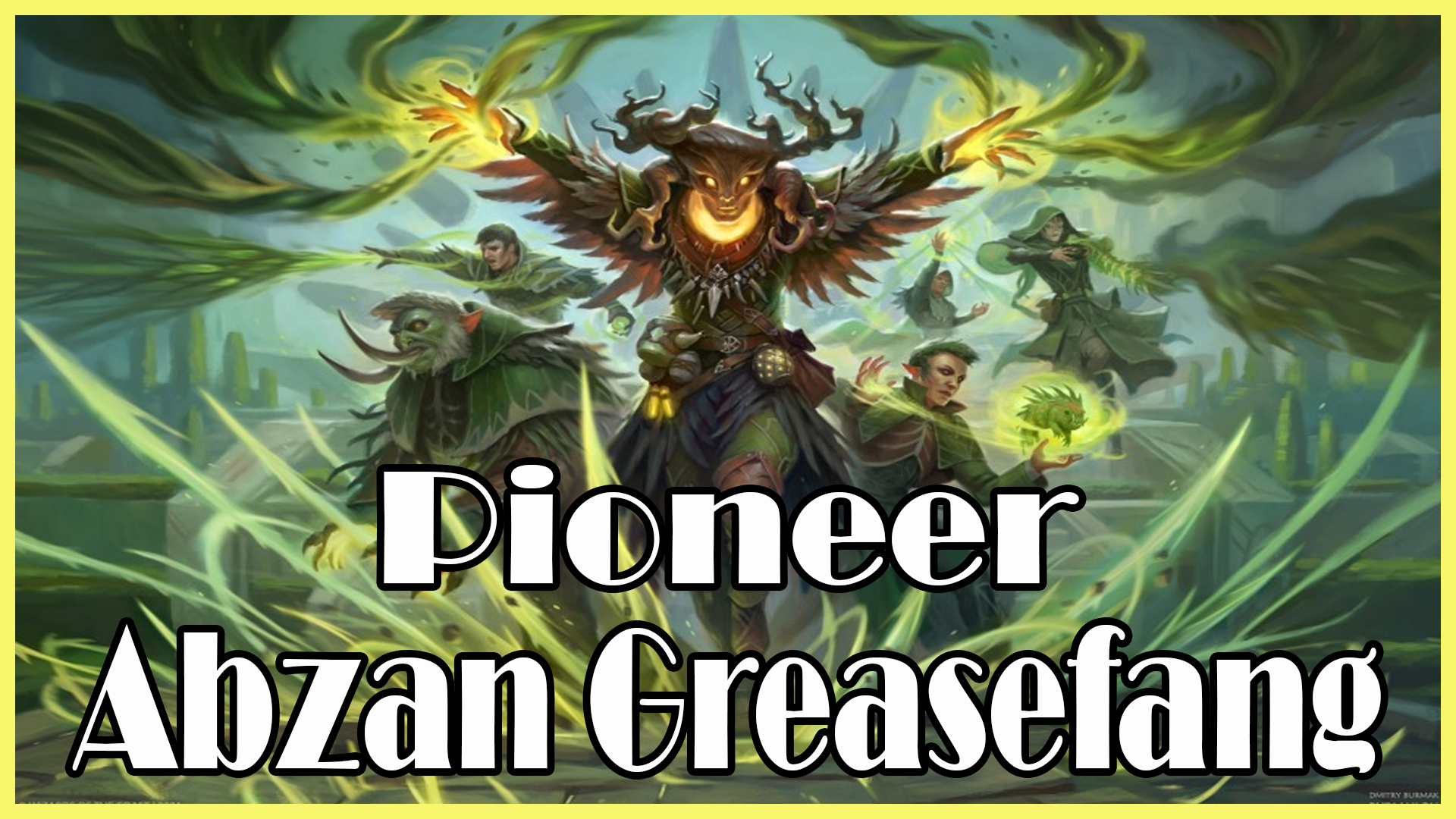 The rat is back! From the printing of Greasefang, Okiba Boss in Kamigawa, Neon Dynasty, we’ve had various styles of decks leveraging the power of Greasefang with Parhelion II. While the rise of Mono Green Devotion temporarily kept the rat down, we saw Abzan Greasefang burst back into the metagame with a 2nd place finish in the Magic Online Championship Showcase Challenge this past Sunday. I’ve played all the various Greasefang, Okiba Boss decks that have put up reasonable finishes and I have to say, I enjoy the Abzan build the most, especially this more refined build from the Magic Online Championship Showcase Challenge. With a variety of enablers, payoffs, and protection for your combo, the Abzan deck is more all-in than some of the other builds, but also manages to protect the combo the best of the various builds.

So, let’s dive in and look at what makes this latest shell of Greasefang, Okiba Boss a powerhouse that many streamers have been playing this week already!

This rat pilot arrived and immediately influenced Pioneer. From bringing back Parhelion II, Esika's Chariot or Skysovereign, Consul Flagship, various decks leverage a pile of enablers to dump these powerful vehicles into the graveyard before Greasefang brings them back to the battlefield. If you have played much Pioneer or Explorer, you know the power of Greasefang, Okiba Boss, being able to rush out vehicles and apply immense pressure. In this Abzan deck, you can attack for 13 and leave behind two 4/4 flying vigilant angels as early as turn two, something nearly no deck can adequately survive.

How can you get the combo down on turn 2? How are we getting these large vehicles into the graveyard? Well, that’s thanks to the enablers of the deck. First, we have the creatures that dump cards into the graveyard, which includes Stitcher's Supplier and Satyr Wayfinder.

Stitcher's Supplier has been a staple of graveyard decks since its printing and in this deck, it enables a turn 2 combo by milling over Greasefang, Okiba Boss and Parhelion II and then casting Can't Stay Away. Supplier also acts as a roadblock to slow down aggressive decks since you can chump block or trade with aggressive creatures and mill extra cards, once again enabling you to dig through your deck looking for your payoffs. Next up we have Satyr Wayfinder, which also mills over a handful of cards into the graveyard, but this Satyr also manages to help smooth your draws by putting a land into hand from the four cards milled over when Wayfinder enters the battlefield. This not only helps you ensure your three-color mana base functions, but it can also help you find Greasefang, Okiba Boss, the vehicle payoffs, or Can't Stay Away.

There’s one more enabler creature, but instead of milling cards over, it allows you to connive away vehicles or extra lands that get stuck in your hand. Raffine's Informant is a great addition to this deck and helps ensure that you can crew your vehicles, even if they manage to answer your Greasefang, Okiba Boss, making it tougher to trap your vehicles in your hand after the Greasefang trigger.

Now that we’ve covered the creatures, next up are Grisly Salvage and Witherbloom Command, both of which put cards into your graveyard and allow you to grab lands or in the case of Grisly Salvage, find key creatures. These spells pair up with the various creature enablers to help turbo cards into your graveyard to ensure you have something to bring back once you find your Greasefang.

Witherbloom Command also manages to have vast flexibility as a drain spell, a kill spell for one-toughness creatures, and an answer to difficult permanents such as Rest in Peace or Weathered Runestone. The addition of Witherbloom Command to this deck is a major part of why it has found success.

Lastly, we have Can't Stay Away, which acts as a reanimation spell to help you get extra value from all the filling of the graveyard your other enablers cause. This spell also works as a five-mana card with flashback, so even if you mill it over, you can still generate value through your other enablers or buy back a Greasefang after discard or removal handles it the first time.

What is the value of going through all this work to mill over vehicles and find your three-drop combo threat? Well, you can get a free, hasty copy of Parhelion II or Esika's Chariot from the graveyard thanks to Greasefang, Okiba Boss. This rat manages to bring back your vehicles and immediately pressure the opponent. There are few decks that can handle repeated Chariot beatdowns or a turn three 8-drop that leaves behind additional threats.

A big part of this deck is that while you can have a fair game-plan, your primary plan is to always leverage the advantage of getting a free Parhelion II way ahead of schedule and forcing your opponent to answer it or the Greasefang, Okiba Boss immediately.

This matchup can be tough as they have a lot of removal along with Graveyard Trespasser to help contain your graveyard. The best way to fight this style of matchup is to remove their key early threats, grind them out with as many two-for-ones as possible, and then sneak through a Greasefang trigger. Especially in the midgame, your goal is to leverage Can't Stay Away to drain their hand of relevant answers before getting one hit in with Parhelion II to lock up the game.

Get in what chip damage you can as it will often come down to slim margins to win this matchup as it can be tricky, especially if they flip Fable of the Mirror-Breaker and pair it with a Graveyard Trespasser.

This matchup is a great example of wanting to hold your discard until you can reasonably play the discard spell and the Greasefang in the same turn. Leverage your small creatures to pressure Planeswalkers and their life total before sneaking through an Esika's Chariot or a Greasefang, Okiba Boss. This can be a tough matchup depending on if they find Farewell, counterspells, and Fateful Absence to answer your threats, but if you can leverage your discard to protect your threats, then you should be able to take down their reactive hands.

This matchup can be tough as they have access to Lightning Axe and other red removal that can clean up your Greasefang, Okiba Boss. This matchup requires finesse as you need to kill their main threats while building up your resources in the graveyard. Once you have your payoffs set, you need to leverage discard to clear the way or use Can't Stay Away to stretch their removal thin so you can get in an attack with Parhelion II.

Your graveyard interaction cards are important in this matchup as once they start casting delve spells, it is very difficult for you to keep up with their card advantage and their ability to take extra turns and flip a Thing in the Ice.

This is the matchup that originally caused Greasefang decks to fall down a few places in the tier list. Karn, the Great Creator is a tough card to win through, Cavalier of Thorns can block all the threats in Greasefang, and their combo can win even if you get into a board stall. Given that you don’t have enough pieces of interaction, you just need to leverage your discard to stop their Karn draws, and you need to go as fast as possible.

Also, note that you can use Skysovereign, Consul Flagship to kill a Karn that has -2’d. This is a big boon for this deck, especially since you can bring it back with Greasefang and then crew once the Karn dies.

This is one of the few matchups where you can take a more controlling role through your added removal, but you still want to try and go quickly enough that they can’t get large and wide enough to go around your creatures. This is a matchup where Stitcher's Supplier goes a long way in helping your main gameplan while also potentially trading or hold back early threats. I like the matchup for Greasefang against these creature-centric decks, especially ones like this that don’t have too many ways to interact.

Keep Brave the Elements in mind as it can be one of the few ways that humans can sneak through for lethal once you have established a defensive line that they don’t want to attack into.

In this matchup, you want to leverage your removal spells for cards like Unlicensed Hearse, but if they don’t have a way to mitigate the graveyard, you want to try and combo as quickly as possible, while taking care for Abrupt Decay. Overall, this mirror can be dependent on how your mills line up or how fully wrapped up your opening hand is in terms of the combo. Leverage your few answers in well-timed spots and you can take over the board with your own combo.

We have seen a resurgence of this rat-based deck this past weekend and it has been impressive in the leagues I have played with it. Keep in mind that your best draws can steal any matchup and that’s always a great feature to have in a competitive deck. Here’s to you finding your Greasefang, Okiba Boss early, milling over your threats on time, and dodging the most aggressive hate-cards.

Thanks so much for reading and stay safe out there!