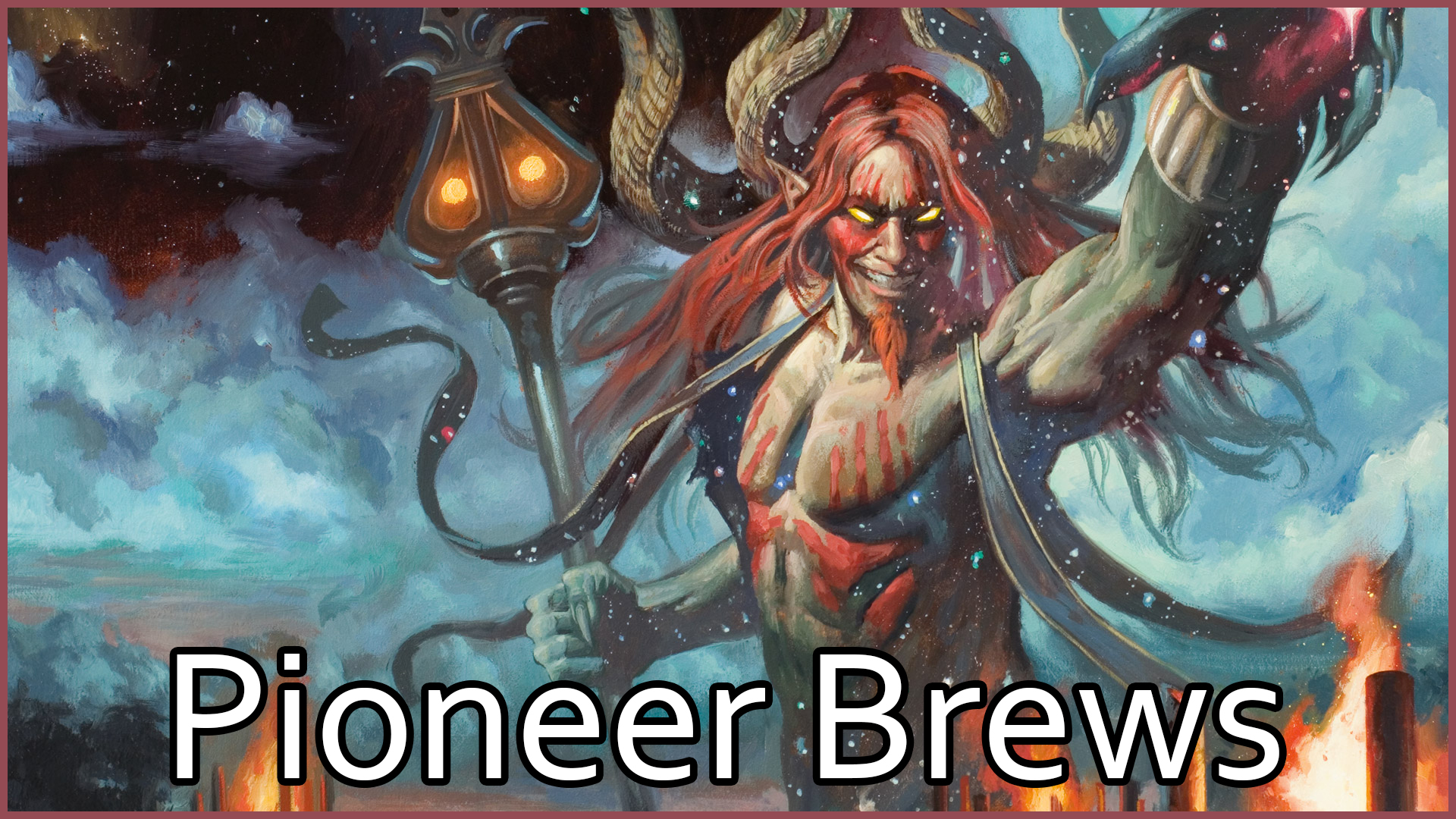 With the Magic Online Showcase coming up along with local paper Regional Championship Qualifiers, we have seen a stark increase the number of players in the Pioneer leagues. A nice side benefit of this increased player base is some more interesting brews making the 5-0 deck lists for us to examine while looking for hot new decks that could disrupt the metagame or simply be fun to mess around with.

Join me as we dive into the best decks from this week’s 5-0 decks that do something different in this brew breakdown.

It’s been a hot minute since we saw a deck with Scapeshift show up in the 5-0 lists in Pioneer, and that list contained the now banned Field of the Dead. This deck leverages the power of fetchlands plus Omnath, Locus of Creation. But I can hear you now, “Fetchlands are banned”, and you’d be right, but this deck leverages the fetchlands we do have through Cabaretti Courtyard, Brokers Hideout, Fabled Passage, and Evolving Wilds. When these are paired with Renegade Rallier, you can quickly ramp out several lands per turn and always get the mana advantage mode of Omnath, Locus of Creation.

We have seen the power of Omnath with fetches in Modern since its printing, but now we can see that power in Pioneer. However, much like in Modern, you need a shell that can give you enough time to survive until your Omnath comes online and this deck borrows from the Niv to Light shells through leveraging Bring to Light, Deafening Clarion, and Supreme Verdict to ensure the board stays clear. With a single copy of Valki, God of Lies and Niv-Mizzet Reborn, you can also Bring to Light for threats other than Omnath if the occasion calls for a different plan of attack.

If your creature plan fails, you have a backup plan with Felidar Retreat generating value for each land you play. Retreat can kill an opponent by itself when paired with Scapeshift. This backup plan also gives you a way to go wide against decks looking to scoot around your few larger threats.

While this style of deck has shown up once or twice in the 5-0 lists before, the additions to this build level it up from somewhat of a meme into something I’d be interested in trying out!

other
pioneer
buy from TCGplayer $388.33

We’ve seen lots of versions of sacrifice decks in Pioneer from Rakdos to Jund, but this version of Golgari maximizes consistency with all 4-ofs and maximizes synergy over power level. Every creature in the deck costs less than three mana so everything can be found off Collected Company and won’t cost too much life off Bolas's Citadel. With 8 mana producing creatures, several creatures that make Eldrazi Scion tokens, and Prosperous Innkeeper, you manage to ramp and cast multiple spells early, taking advantage of tempo instead of raw power level.

Once you have established a wide board of smaller creatures and tokens from Woe Strider and Catacomb Sifter, you can scry through your deck quickly until you find one of your payoff spells like Collected Company, Bolas's Citadel, Priest of Forgotten Gods, or Zulaport Cutthroat. Once you have a wide board with one or two Cutthroats on board, you can quickly drain out your opponent even before you find a Citadel.

With this style of build, you should be able to kill as soon as Bolas's Citadel comes down thanks to various scry effects to filter excess lands off the top of your library. Once that is paired with Cutthroat and Prosperous Innkeeper, you have a ton of excess life to work with, so you can churn through your library until you have enough permanents in play to sacrifice to Citadel for the win.

We’ve seen Citadel focused builds of sacrifice before, but this new Golgari build feels like the most all-in and streamlined version I’ve seen lately and plays out very well into the various Aggro decks of the format.

During the Pioneer Star City Games Invitational, one of the decks that showed up with great success was Azorius flash. This deck leveraged the power of Smuggler's Copter to fix your midgame draws. With Smuggler's Copter banned, we saw Azorius flash seem to disappear into the annals of past Pioneer decks. In this week’s 5-0 dumps though, it resurfaced.

Using The Wandering Emperor, Brazen Borrower, Spell Queller, and Archangel Avacyn alongside Shark Typhoon, all the threats of the decks come in at instant speed. This ensures that you can constantly hold up mana without giving away what you are doing since the rest of your cards work at instant speed, such as counterspells, Settle the Wreckage, and instant speed removal. This constant weighing of decisions on your opponent can force them to play into one spell and die to another, giving you an advantage each time they play around the wrong spells.

Post-board, you can transform this deck into a more controlling deck by bringing in extra sweepers or leverage the instant speed nature to be more aggro than tempo through more counterspells to back up your early threats. This is a deck that will require plenty of practice to correctly evaluate the threats from the opponent, but once you’ve done that this looks like a solid build to revive the long forgotten Azorius flash archetype.

other
pioneer
buy from TCGplayer $541.27

We’ve seen Indomitable Creativity seeing play in Pioneer and Modern, but while the more common builds in Pioneer are Izzet, we’ve seen this Rakdos Creativity deck start to pop up in the 5-0 list a few times. This deck leverages blood tokens and treasure tokens along with removal and discard to ensure that you can cast Indomitable Creativity for at least X = 2. Once you’ve cast creativity for two, you put in Xenagos, God of Revels and Worldspine Wurm, creating a 30/30 trample haste threat that can come in and end the game instantly. Even if your opponent answers the Wurm, it creates 15 power worth of 5/5s while also shuffling back into your deck for future creativities. This deck is a bit of a glass cannon shell, but you can keep aggressive decks from killing you early while setting up the combo thanks to the power of removal in Rakdos. Post-board you bring in specific hammers for various matchups to ensure your combo goes off without a hitch. I haven’t found this deck to have too much success outside of leagues, but the continued success in leagues makes me think there’s likely something here with enough tuning or a metashift away from hand disruption or counterspell heavy decks.

There you have it, the best of the many brews that managed to snag a perfect record in the Magic Online Pioneer leagues. There were plenty of other juicy decklists for you to check out over in our tournaments section of the website. Keep an eye out every Monday and Thursday for more decklists and maybe you’ll find the next hot deck before it becomes a well-known staple of the format!

Thanks for reading, I hope you find some joy in the brewer’s paradise of Pioneer and stay safe out there!