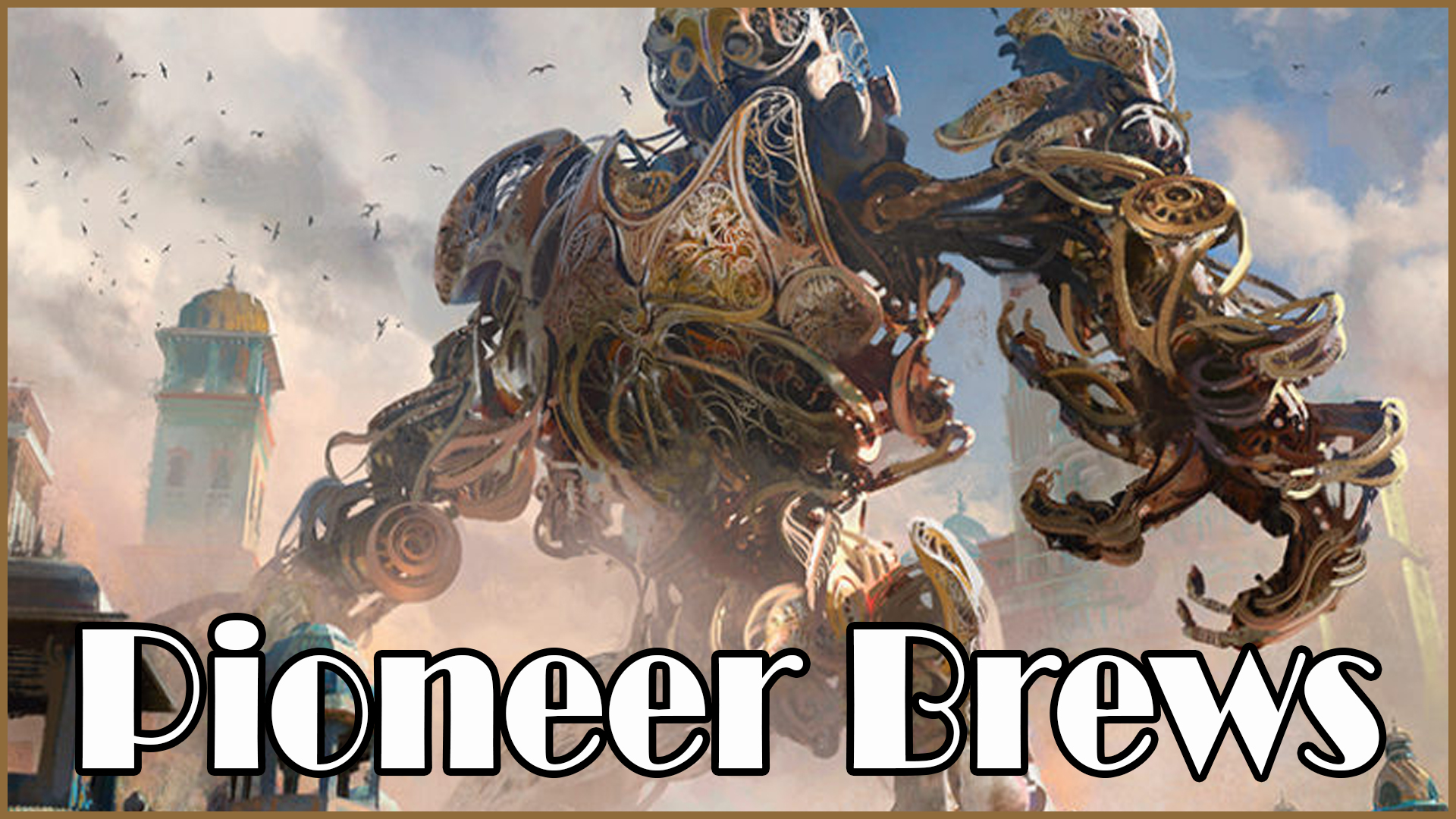 With the Magic Online Showcase Challenge coming up along with local paper Regional Championship Qualifiers, we have seen a stark increase the number of players in the Pioneer leagues. A nice side benefit of this increased player base is some more interesting brews making the 5-0 deck lists for us to peruse while looking for hot new decks that could disrupt the metagame or simply be fun to mess around with.

Join me as we dive into the best decks from this week’s 5-0 decks that do something different in this brew breakdown.

It has been quite some time since Metalwork Colossus appeared in my feed of decks that could 5-0 and I’m always happy when it happens. Unlike some other Colossus decks, this one seems like it may have some staying power with various ways to make your large threat evasive and potentially lethal in one shot. Combining Karn, the Great Creator with Metalwork Colossus gives you virtual access to seven copies of Colossus and with Ingenious Smith and Inventors' Fair, you should never have problems finding your hulking threat. Add in various artifacts to power out early Metalwork Colossus and this deck should have no problem dealing with midrange decks and Aggro decks that cannot kill an early 10/10. Don’t forget that you can sacrifice Colossus to Witch's Oven and immediately bring it back from your yard to hand with the two foods.

Some older builds ran Aetherflux Reservoir to allow for infinite life when you cycle your Colossus through an Oven and recast it for free – with 10 mana value of non-creature artifacts out. This version doesn’t run that combo, but it is worth considering as we have seen the power of combos that can go over the top elevating a deck like Mono Green Devotion.

From Esper to Mardu to now Abzan, we have seen plenty of Greasefang shells before, but seeing an Orzhov only Greasefang, Okiba Boss deck that also runs Yorion, Sky Nomad was a bit of a surprise. Laa11 builds tons of decks that have a twist on traditional archetypes and they often overperform expectation. This build leverages Professor of Symbology and Eyetwitch lesson enablers along with an extra discard outlet alongside Raffine’s Informant to ensure you can discard your Parhelion II. The rest of the creatures in this deck all act as value engines to ensure you can grind through just about anything in the mid to late game, especially when paired with Charming Prince, Extraction Specialist, and Yorion to generate seemingly infinite value.  I love when decks have a combo plan and a recursive value plan, so the opponent must respect several means of attack all without knowing which you are setting up. I could see this style of Greasefang picking up steam, especially to fight two-for-one decks like Rakdos Midrange that can more easily stop your graveyard plan. This version leverages the mana advantages of Lotus Field to play Invoke the Winds, a solid five-mana way to steal creatures or artifacts. While the effect is costly, being able to steal problematic permanents makes it live to help your board position against almost any deck. The backup plan for this deck is like the Izzet Control decks of old, leveraging Narset, Parter of Veils alongside Collective Defiance to Mind Twist your opponent while also potentially killing a threat.

If I had to list one reservation about this list, it’s that there aren’t a ton of ways to come back from behind, such as Anger of the Gods or a more expensive sweeper like Burn Down the House. With something like that, I think the deck could reasonably fight from behind and leverage late game powerful effects alongside Lotus Field.

Last time we looked at the 5-0 lists, we saw Boros Hammer as the most interesting Aggro deck of the lot, this time we are staying with Boros, but moving to a more creature-centric Aggro shell that leverages two of the best non-creature spells in Aggro: Embercleave and Kumano Faces Kakkazan. This version of Boros leans on a very low mana value curve that tops out at three-mana while still having enough raw power to get through the decks of Pioneer. We’ve seen many decks start to pick up the shell of Luminarch Aspirant, Thalia, Guardian of Thraben, and Adeline, Resplendent Cathar and this deck pairs them with various hard to answer creatures and value interaction in Bonecrusher Giant and Skyclave Apparition.

This deck also gets to leverage the power of red removal in the sideboard to help battle other Aggro decks alongside cards like Archon of Emeria, Fiendslayer Paladin, and Rest in Peace as sideboard cards that can put decks in awkward positions while under heavy pressure. This looks like a powerful Aggro deck that I think might fit into a similar place in the metagame as the various humans lists, especially Mono White Humans, and I am looking forward to finding more of these Aggro shells that can survive the more midrange metagame of Pioneer right now.

I’ve seen this style of decks before in Standard and early Pioneer, but it has been a while since we have seen an Oketra's Monument deck make a 5-0 run. This deck powers out creatures with the cost reduction side of Monument while going wide thanks to 33 creatures, many of which provide extra value or tempo alongside the 1/1s from Monument. These value creatures eventually overtake the battlefield paired with Angel of Invention or Intrepid Adversary as anthem effects. Like other decks we have mentioned above, the benefits of being a white deck post-board are very noticeable right now with Archon of Emeria, Elite Spellbinder, Skyclave Apparition, and Dovin's Veto as options for this deck to adjust to the opponents’ game plan. I love this style of creature tempo decks that can lock up the board against aggressive decks and out tempo control decks before holding up counterspells for key turns.

While some of the other decks on this list capture my attention through their uniqueness, this deck is the one that I would most likely register for a local event. It has a consistent and powerful gameplan that feels like you could even tinker with it a little more to target specific matchups through your sideboard plans. Plus, I’m a sucker for Westvale Abbey and it’s nice to see this card showing up on a 5-0 decklist.

There you have it, the best of the many brews that managed to snag a perfect record in the Magic Online Pioneer leagues. There were plenty of other juicy decklists for you to check out over in our tournaments section of the website. Keep an eye out every Monday and Thursday for more decklists and maybe you’ll find the next hot deck before it becomes a well-known staple of the format!

Thanks for reading, I hope you find some joy in the brewer’s paradise of Pioneer and stay safe out there!