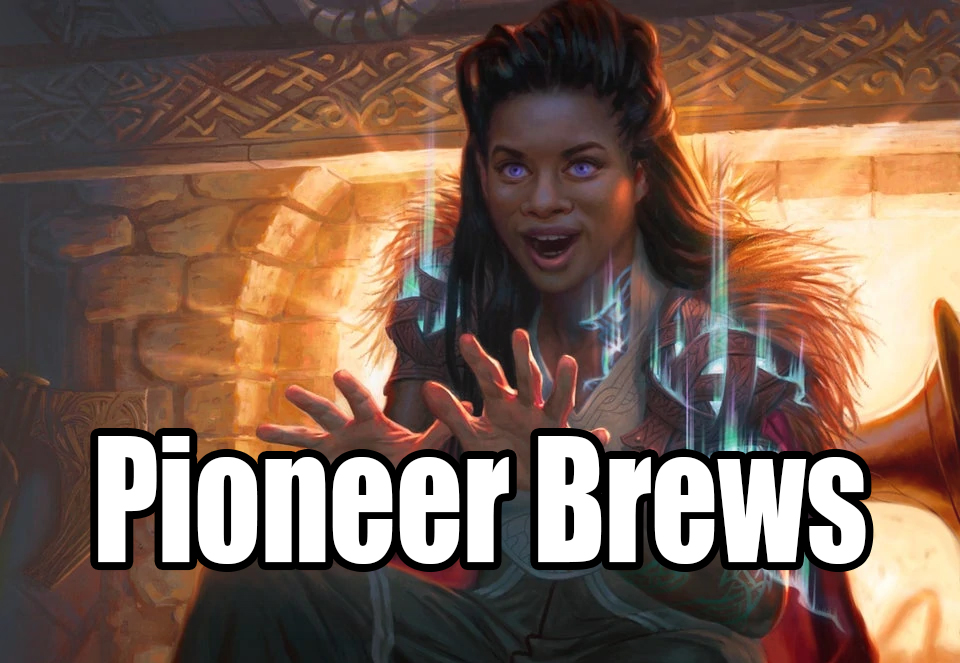 One of my favorite parts of Pioneer is looking through the 5-0 League decklists each week that Wizards of the Coast publishes and finding some unpolished or surprising gems among the litany of top tier strategies. These decks will sometimes bust out when you give them a spin, but sometimes they give you a leg up in the Magic Online leagues and can even give you inspiration for your local events.

Pioneer is far from solved and these new brews continue to give me hope that there will always be churn in the format to keep any one deck from becoming too egregious of a problem. We saw this with the rediscovery of Boros Heroic to attack Mono Green Devotion and while many times the deck that rises was once a tiered deck, all tiered decks must start somewhere.

Join me as I go through the 82 decks that were published for earning a 5-0 record in the Magic Online Pioneer leagues and see if any of these decks spark your interest as we lead into RCQ season along with a major Pioneer Showcase event on Magic Online towards the end of July.

When Urabrask, Heretic Praetor was first spoiled, this Phyrexian looked like it could have some potential as the top end for red midrange decks. As time passed, the card failed to live up to any semblance of expectations, but even so, it was remarked that with Drannith Magistrate, you could lock out your opponent. Player Aeolic managed to form this deck together taking the best controlling pieces of white and red, creating a midrange deck in the same vein that we have seen players do with black white for a few months now. Leveraging the power of Fable of the Mirror-Breaker, cheap interaction, Bonecrusher Giant, and The Wandering Emperor, this deck can easily tackle the rising Aggro decks of the format while having post board game against control.

One of the interesting cards in this deck outside of Urabrask, Heretic Praetor that stands out as a card that hasn’t been fully explored in Pioneer is Outlaw’s Merriment. This card reminds me of a more modernized Assemble the Legion, with an element of randomness, but that can take over the game against slower decks.

My major concern for a deck like this is closing the game quickly enough against control if your Planeswalkers don’t resolve, outside of Chandra, Awakened Inferno. If you manage to find yourself against a plethora of creature decks, this take on Boros Midrange looks quite promising. Whether it can find a place in the metagame alongside other Midrange decks like Rakdos Midrange and Niv to Light is certainly far from definitive yet.

We’re not moving away from Boros with our second deck, but this is far from a midrange deck looking to extend the game. We’ve seen various takes on Boros Hammer in Pioneer before, leveraging the power of Colossus Hammer with Sigarda's Aid and Fighter Class. This version solidifies the gameplan with Moon-Blessed Cleric to find your enchantments, more cheap equipment to power up your creatures, and more evasive threats like Healer’s Hawk to ensure you can get around opposing defenses. While this deck lacks much of the power of the Modern Hammer decks, I like the concept of a deck that can get well under decks like Azorius Control, Lotus Field, and Mono Green Devotion. While I suspect that removal heavy decks like Rakdos Midrange would be the nightmare scenario for this deck, this list leverages Adanto Vanguard to pressure decks with red removal.

Paired with Portable Hole and Rending Volley to slow down Izzet Phoenix, it seems that CuteChandra19 plotted out where the deck was likely to struggle and put in plenty of, pardon the pun, hammers into the sideboard. I’m not sure the deck needs a full four Alpine Moon to deal with Lotus Field or Mono Green Devotion creating massive mana advantages, but if you have to rely on your three-drop to find your Sigarda's Aid, it makes sense to potentially buy enough time to suit up your creatures with a large hammer.

This is a spicy one by MTGO player Togec that is reminiscent of the Alchemy or Historic decks that leveraged the power of Grinning Ignus style effects to generate mana with any cost reducer. In this case, we have Hazoret's Monument and Birgi, God of Storytelling to pair with our Ignus to generate infinite enter the battlefield triggers. Now, that wouldn’t be the most impressive thing, but we have a few tricks to make it better. Grinning Ignus happens to be an elemental. So, when paired with Risen Reef, you can trigger the Reef as many times as you’d like to pull ahead. With Monument, you can loot with each cast until you find whatever card you need. With Devilish Valet, you can create a trampling creature with infinite power to kill your opponent. I’m sure this deck gets an advantage from killing players who don’t understand what the deck’s main gameplan is, but that gameplan seems solid enough to beat even those expecting it. With Collected Company serving to help establish an early board and value creatures like Runaway Steam-Kin and Thunderkin Awakener helping to act as lightning rods and ways to mitigate the effectiveness of removal respectively, you can more likely establish the combo.

In post board games, you can pivot into an Aggro control deck with removal, counter spells, and other very specific, but powerful sideboard options. Getting to have a proactive and powerful combo with hard-hitting answers out of the sideboard to help across the board gives me hope that this archetype could start to see some play. I know that I’m excited to give it a whirl and honestly, I could see it going 5-0 or 0-5 and neither would shock me entirely.

I’m a sucker for taking powerful Standard decks and translating them into Pioneer. First, I was entranced by Hinata, Dawn-Crowned and now this Grixis Vampires deck by user Kyon1024 reminiscent of Mike Sigrist’s top 8 deck from the Streets of New Capenna Set Championship has my attention. When Streets of New Capenna was first spoiled, may players expected Lord Xander, the Collector to pair with Sorin, Imperious Bloodlord to potentially end the game on turn three, figuratively speaking. However, it quickly became apparent that Lord Xander just couldn’t make the grade in Pioneer. This deck instead leverages the power of Evelyn, the Covetous as a top end, replacing Champion of Dusk as the card advantage engine of choice for Vampires. One of the major complaints I have about Vampires in Pioneer is that it’s a deck that works when you draw well, but you have no agency over what you draw or when you draw it. This deck solves that problem in spades with plenty of new cards like Bloodtithe Harvester, Corpse Appraiser, and Fable of the Mirror-Breaker. Getting to play a strong Rakdos Midrange style fair gameplan with the bonus plan of leveraging one of the most powerful Planeswalkers in Pioneer makes for a great concept.

With access to a variety of powerful sideboard cards against the top decks in the metagame, I think this deck fits nicely into the current metagame, especially if Mono Green continues to be absent from the top tables. While many of the other decks on this list are perhaps a bit spicier, this one feels like it is the closest to being ‘Real’ in the sense that I could see this picking up play and finding success winning against Aggro decks thanks to Kalitas, Traitor of Ghet, both Sorins, and your bevy of removal along with having game against various midrange decks through Evelyn, the Covetous and Fable of the Mirror-Breaker.

This archetype exploded this past week. We saw upwards of five different builds of Selesnya Auras 5-0 or get results posted from Preliminary events on Magic Online. These builds vary from more traditional Auras decks revolving around Sram, Senior Edificer and Light-Paws, Emperor's Voice to using all hexproof creatures like Gladecover Scout and Bassara Tower Archer to act as a Boggles deck. While I can’t quite say for sure which version will last the test of time, given the vast quantity of this style of deck that appeared in this week’s results, there’s lots of tinkering to be done to find the right configuration. That being said, I prefer this build by user Zocojr that uses a mix of both styles leveraging the eight hexproof creatures, Light-Paws, Emperor's Voice, and Lagonna-Band Trailblazer to help with Aggro decks getting under you before you can Voltron up your creatures. Much like with Orzhov Auras, there will also be a great amount of tinkering with the auras you can run and if you want to splash for auras like Messenger's Speed, use something like Keen Sense to draw extra cards, or if you want to max out on the fight and trample auras.

While this deck has the least flexibility in terms of moving from main deck to sideboard, I think this style of deck can generally work well against other Aggro decks and with the hexproof creatures, you can easily beat up interactive decks. Also, bringing back Witchstalker is a great idea in a world where Izzet decks need to churn through their deck and once they start, your wolf will easily threaten their life total. My biggest want from this list would be Tamiyo's Safekeeping to ensure you can also survive into Supreme Verdict.

I’ve played with and against this deck and it was surprisingly resilient, and I think players looking to steal games at their local RCQs should consider investing in this style of deck.

There you Have it, the best of the many brews that managed to snag a perfect record in the Magic Online Pioneer leagues. There were plenty of other juicy decklists for you to peruse over in our tournaments section of the website. Keep an eye out every Monday and Thursday for more decklists and maybe you’ll find the next hot deck before it becomes a well-known staple of the format!

Thanks for reading, I hope you find some joy in the brewer’s paradise of Pioneer, and stay safe out there!