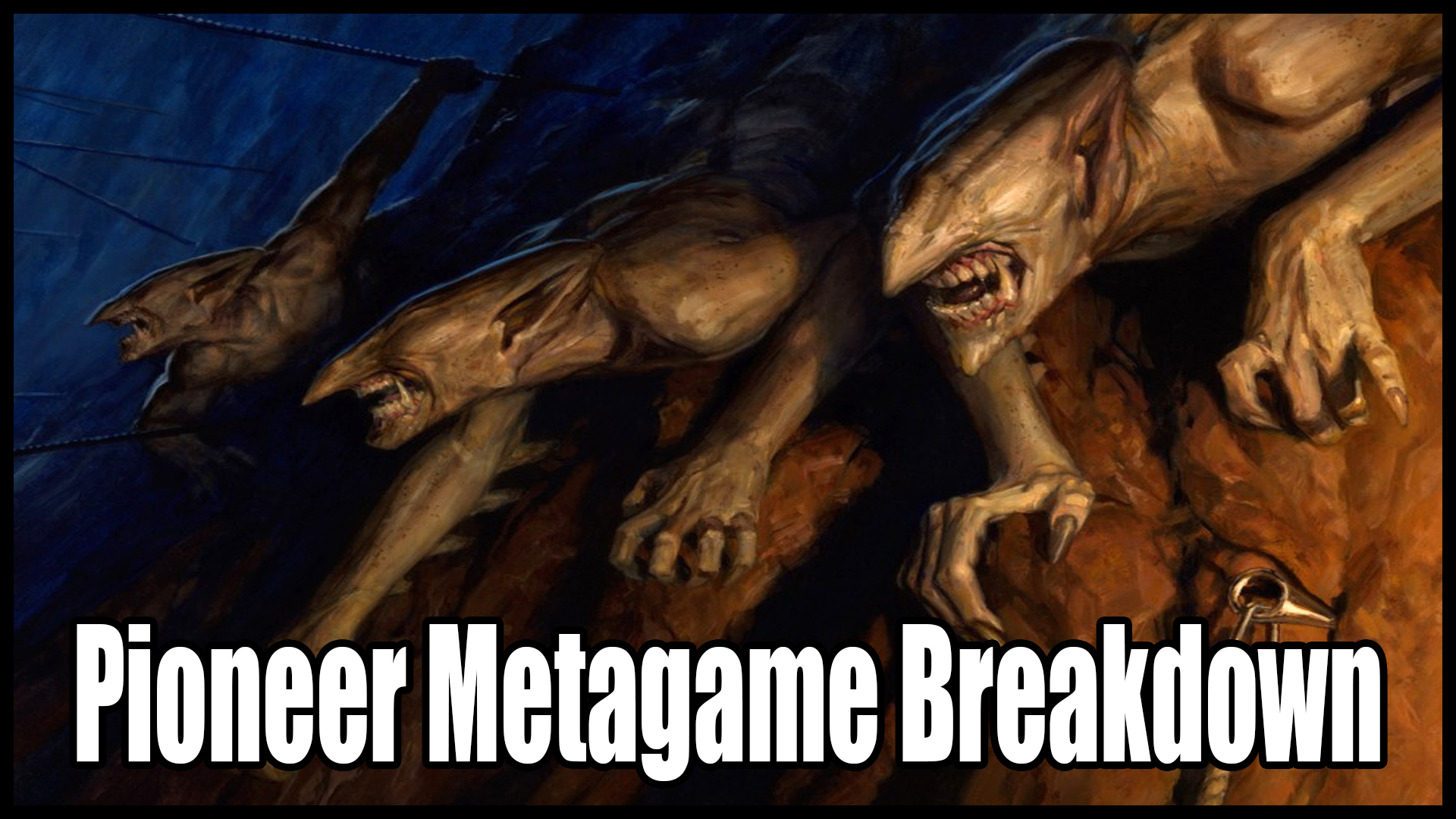 With weekly Regional Championship Qualifiers every weekend and the upcoming Magic Online Championship Showcase Challenge this weekend in Pioneer, it’s time to take stock of what decks are at the top of the metagame and what you should be playing.

While there haven’t been any huge shift in the metagame since Winota, Joiner of Forces and Expressive Iteration were hit last month, we have seen some targeted hate towards Mono Green Devotion, leading to a variety of other decks heading into the highest tiers.

So, let’s break down the various events we are drawing data from this week!

Now that we’ve covered our data set, let’s get into the decks that will show up at your upcoming events!

These are the decks you either need to know how to play or how to beat if you want to win your invite to the upcoming Regional Championships. All these decks are long time stalwarts of the format and continue to adapt and iterate with each new metagame. Some of these decks have even survived targeted bans to keep them in check and bounced right back into the upper echelon of Pioneer.

We’ve seen Rakdos Midrange climb week after week with a better tuned list to attack the metagame at large. The most consistent deck in Pioneer, Rakdos Midrange leverages the power of cheap interaction, Fable of the Mirror-Breaker, and a more aggressive creature suite built around Bloodtithe Harvester, Bonecrusher Giant, and Graveyard Trespasser.

While decks like Izzet Phoenix and Azorius Control are close matchups, the downtick of Mono Green Devotion is one of the biggest reasons that Rakdos Midrange has gain percentage against the metagame at large. While Aggro decks will continue to struggle against Rakdos Midrange and Izzet Phoenix, as the metagame slows down, Rakdos can leverage the more aggressive early creatures to avoid decks going too far over the top, keeping it in a good position regardless of what else is popular.

Even with the banning of Expressive Iteration, we have seen Izzet Phoenix leveraging cheap interaction, cantrips, and threats like Ledger Shredder, Arclight Phoenix, and Thing in the Ice to find continued success. It’s hard for a deck that leverages constant card advantage and card selection to struggle long term as you can customize your main deck and sideboard to attack various meta shifts.

There’s a lot of power in this deck with the various delve spells along with your recursive threats and very few decks have found consistent ways to beat up Phoenix, no matter how often this deck sits at the top of the Pioneer metagame.

For a while, we saw the 80-card Yorion builds represented as the best version of Azorius Control, but this past weekend the 60-card version managed to take down the challenge. The biggest difference in the two builds is having access to your key cards post board against matchups like Spirits, Boros Heroic, Lotus Field combo, and Mono Green Devotion.

Azorius Control is one of the few decks that can consistently go over the top of both Izzet Phoenix and Rakdos Midrange and is the strongest control deck in the format. If the 60-card version can more consistently beat Mono Green Devotion, then we could see Azorius Control rise back to the best deck in Pioneer like it was before Mono Green Devotion and Lotus Field combo arrived in the metagame in full force.

These decks are powerful and tend to be contenders to make the top 8 of challenges, though often they are a step behind the tier 1 decks either in their place in the overall format or when looking at a specific key matchup.

These decks can easily steal a tournament and can usually adapt to various metagame changes. While not as consistent as tier one decks, it is never a surprise to see these decks making top 8 or putting up several copies into the top 16 depending on how things shake out.

Mono Green Devotion has been bouncing all over the place lately. From the most dominant deck in Pioneer to nearly out of the metagame, last weekend we finally saw a solid performance that acted a bit like the gatekeeper between the top decks in the meta and the decks just below. While the list that top 8’d added in Nicol bolas, Dragon-God as a castable threat through Oath of Nissa and Storm the Festival, it opens the idea that there is still more development for this deck in the future.

While Mono Green fell when there was a target on its back, we now see that as the meta adjusts to other decks, Mono Green can continue to exist as a solid meta choice.

These decks tend to have something holding them back from making it into the top two-tiers and will often spike a single copy into top 8 on a good weekend. Most weekends though, I would expect these decks to exist in the top tables and finish somewhere around the top 16.

These are decks that either have a piece missing or have some subsection of matchups that consistently keep them from achieving the results they otherwise would in a different metagame. Some of these decks are former tier one or two decks that are down on their luck due to some changes in metagame or the discovery of a new archetype or top deck.

One of the best Aggro decks in the format, Boros Heroic continues to fight through the various midrange decks in the format, but like other Aggro decks, it will struggle against Rakdos and Izzet being able to trade one for one over again. While Heroic is the fastest deck at being able to punish Mono Green Devotion alongside any midrange deck that isn’t overloaded on removal, it does struggle into all the tier one decks and that is a major issue when considering this deck for the upcoming Magic Online Championship Showcase Challenge.

The last pure combo deck standing in Pioneer, Lotus Field Combo managed to win both challenges a few weekends ago by beating up on Azorius Control and Izzet Phoenix along with adapting to Mono Green Devotion and Rakdos Midrange. Through adding in additional copies of Natural State, Boseiju, Who Endures, and Otawara, Soaring City, Lotus Field can deal with the hate pieces of Mono Green along with Pithing Needle turning off Karn, the Great Creator, disabling the combo from the green deck.

While Lotus Field does struggle into various Aggro decks, thanks to Rakdos Midrange and Izzet Phoenix, we are seeing the overall metagame shifting towards a slower and grindier metagame, which is perfect for Lotus Field Combo to take advantage of. Expect this deck to continue to show up near the top tables in the hands of skilled pilots, but the deck is far from dominating in its metagame share or representation.

Rakdos sacrifice was struggling to find any footing in the metagame when Mono Green Karn was a dominant force. That build of Rakdos sacrifice was running more artifact-based engines, such as Oni-Cult Anvil, but now the deck has pivoted towards Claim the Firstborn, Unlucky Witness, and Ob Nixilis, the Adversary. This newer build of Rakdos sacrifice is much better into most of the metagame decks as Witch's Oven and Cauldron Familiar is enough to stop most Aggro decks and slowly grind out the more controlling decks.

Where Rakdos sacrifice especially shines is against Rakdos Midrange and is one of the few decks that has a strong matchup into the best deck in Pioneer now. By being able to grind out the midgame through two-for-one value trades and leveraging your cat-oven combo to slow down the game and drain life with The Meathook Massacre to turn the corner before Rakdos Midrange can deal with your engines.

One of the best midrange decks in the format, Niv to Light leverages a glut of removal along with Bring to Light and Niv-Mizzet Reborn to ensure you never run into a situation unprepared regardless of opponent. With various wrath effects, several powerful threats, and Tibalt, Cosmic Imposter, this deck chews through Aggro and midrange decks, but does struggle into controlling decks and especially combo decks like Lotus Field combo.

If you expect a metagame filled with Rakdos Midrange along with Aggro decks, Niv to Light is a top choice, but buyer beware of various combo decks like Mono Green Devotion or Lotus Field as you go over the top, but not nearly fast enough to stop them from killing you.

Humans has been picking up lately. We’ve seen everything from Mono White to five-color humans and everything in-between. These Aggro decks leverage the addition of a second ‘Rainbow’ land that can tap for any color of mana for specific creature types and in this case, that is humans.

Leveraging some taxing elements such as Thalia, Guardian of Thraben and Reflector Mage alongside efficient creatures like Experiment One and Thalia's Lieutenant to quickly pincers your opponents and forces them to answer everything quickly.

The various Humans builds are the best up and coming Aggro deck in the format and as we solidify which build is truly the best, I suspect humans will climb into tier 2, even if tier 1 might be a tough sell with red and black based removal decks in the top echelons of Pioneer.

While plenty of established archetypes aren’t listed above, understand that they can show up and often will in leagues, preliminary events, and even challenges. These lists above are the mainstay top decks and are the most reliable finishers in the winner’s metagame. Decks in the top 2 tiers are generally more stable, whereas tier 3 and below decks tend to oscillate between the lower tiers depending on several factors including what decks pick up in popularity each week. While some of these decks are better positioned for any given week, any deck within the top 2 tiers can win an event and wouldn’t be overly shocking.

Best of luck at your upcoming events and be sure to stay safe out there!